The Tax Cuts and Jobs Act (TCJA) has added mightily to the already serious income and wealth inequality in America. Yet our state’s Republican representatives in Congress seem oblivious that most people in this state are poor relative to the rest of the country. They have boasted about what amounts to the crumbs on the table that middle and lower income West Virginians gain from this Act. For example, Rep. Alex Mooney, who represents much of the Panhandle in Congress, announced that he voted for “tax cuts for all West Virginians.” Always obsequious when it comes to the White House, Mooney said “President Donald Trump has been a true leader on delivering tax relief for all Americans and I am looking forward to continuing to work with him to create more jobs and to keep our economy growing.” There is no other way to put it — this emphasis on the illusory benefits enjoyed by the broad middle of our society is just willfully deceptive. The true winners under the TCJA are the rich, who will benefit at the expense of the rest of us.

Even the frequently touted tax reductions for lower and middle income taxpayers are not intended to be permanent. These will decline over the next eight years and ultimately expire. Sen. Shelley Moore Capito argued in the December 27, 2017, Spirit of Jefferson that the new law doubles the standard deduction to $24,000 for couples. But she failed to mention that this increase also expires in 2025. Furthermore, she didn’t even try to defend some of the law’s permanent features, which benefit the wealthy. These are the $1.5 trillion tax cuts for corporations, which will do nothing but increase the value of corporate stock in the hands of the wealthy, and the repeal of the Affordable Care Act’s individual mandate. The repeal of the mandate will generate $53 billion in annual savings by 2027, paying for about one-third (about 4.7 percentage points) of the bill’s 14-percentage-point permanent cut in the corporate rate. But it will leave millions more uninsured and raise premium rates for many others.

Here are three additional key ways in which the TCJA benefits the rich at the expense of the rest of us:

Distributing Tax Cuts Disproportionately to the Rich. The Tax Policy Center, a joint effort by the Brookings Institution and the Urban Institute, put it this way: “In general, higher income households receive larger average tax cuts as a percentage of after-tax income, with the largest cuts as a share of income going to taxpayers in the 95th to 99th percentiles of the income distribution.” This result will clearly play out in West Virginia. 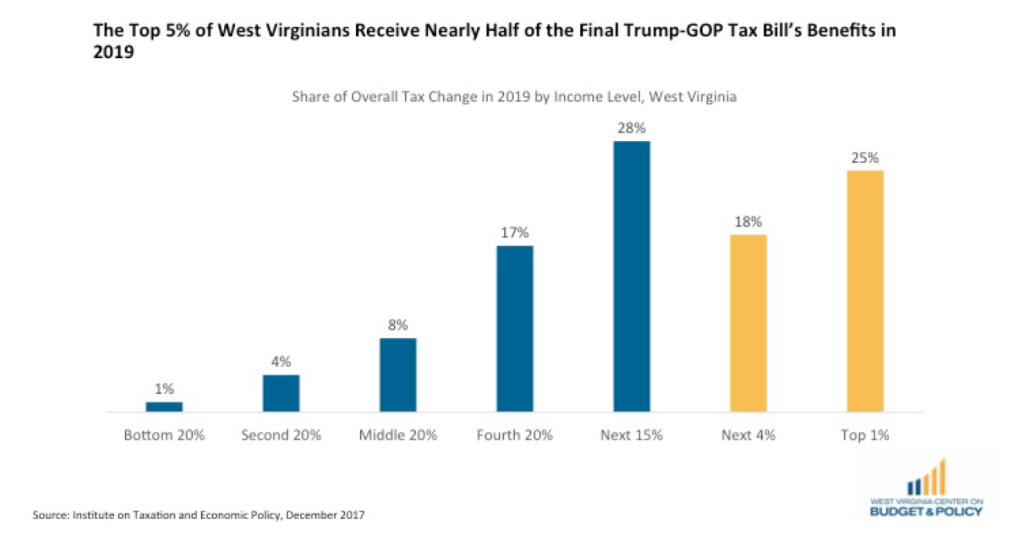 Doubling the Estate Tax Exemption. The TCJA doubles the exemption from tax on estates valued from $11 million per couple to $22 million per couple. Doubling the exemption reduces the share of estates facing tax from 0.2 percent to 0.07 percent, leaving only 1,800 taxable estates nationwide. It is hard to understand why this tax change was so important — unless satisfying rich donors is considered. The estate tax rate is only 17%, far less than on ordinary income for this group of taxpayers. Still the tax exemption will be worth on average $4.4 million to those upper-end estates who will now be exempt. To put this in perspective, $4.4 million is about what it would cost to give 1,100 Pell grants to low income students.

I get it that current Republican ideology is interested in directing policy benefits to those in society they call the “makers,” while being far less concerned about everyone else whom they label the “takers.” The TCJA is a perfect example of how this works, even though Republican politicians continue to argue falsely that the beneficiaries of this law are the middle class. To some extent, the horse is out of the barn — this bad tax law passed warts and all. But we cannot let this go. At every opportunity in the run-up to the 2018 mid-term elections and then on to 2020, we need to keep this issue at the front of the debate.

Government by the Rich, for the Rich West Virginia’s New Voter ID Law and the Myth of Voter Fraud
Scroll to top